A climb up the bell tower 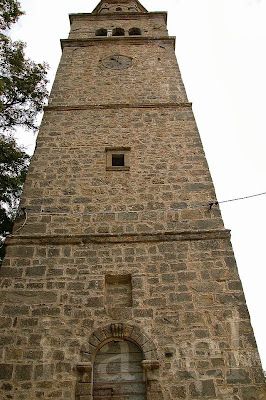 Every town and village in Istria is dominated by a church whose tower is the highest point of the skyline. This is of course true of many towns and cities across Europe.

What’s unique in Istria is that the bell tower is always separate from the church building.

A small village like Gračišće had seven churches at one time and today six are remaining. St. Vitus church (dedicated to the patron saint of the village) is the largest and the one with the bell tower, which is 30 metres high. Though the church was built in 1769, the bell tower dates back to the 13th century. This probably means the church was rebuilt at some point, maybe more than once. The tower is visible from almost every corner of the village and I can see it from my window.

(Left: the bell tower of St. Vitus church in Gračišće) 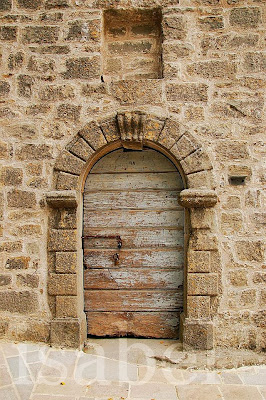 Not only does the bell tower dominate the village visually, but it also makes itself heard. The bell rings at each hour, a chime marking each hour, and at 6am and 8pm the bells ring continuously for about five minutes. This happens again just before mass is celebrated.

The bells also ring when there’s a death in the village or surrounding area. We know that when the bells start at a random time and go on for 20-30 minutes, it's bad news.

I recently climbed up the bell tower to get a view from the top.

(Right: the entrance to the bell tower) 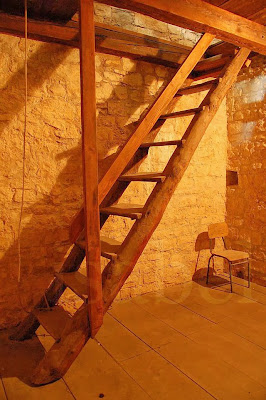 There are wooden stairs climbing all the way up, with several landings.

A rope hangs all the way down the shaft, with a small hole cut in the wooden floor at each level to let it pass through. Of course today there's an electronic system which is programmed to automatically set off the bells, but at one time this was done by hand.

To get to the last level there's a trap door to open and a narrow stairway to climb.

I was now at the top! It was a windy day, so the sound of the wind was quite loud... 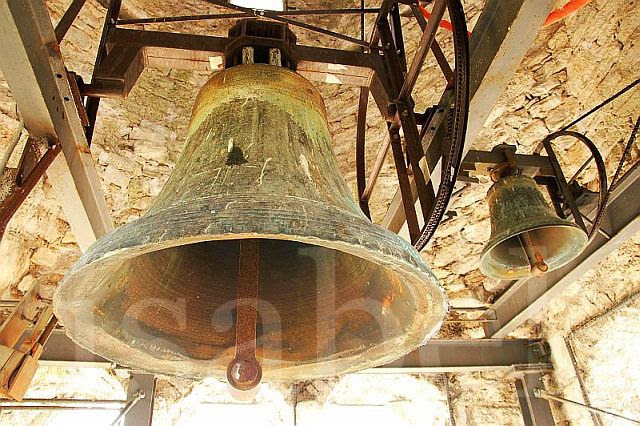 The existing bell is not the original. My father told me that the original was much, much bigger. It was removed during Mussolini's time (this was Italy in between the World Wars) and melted to make armaments. The bell was thrown down from the tower, dropping heavily to the ground and creating a small crater. 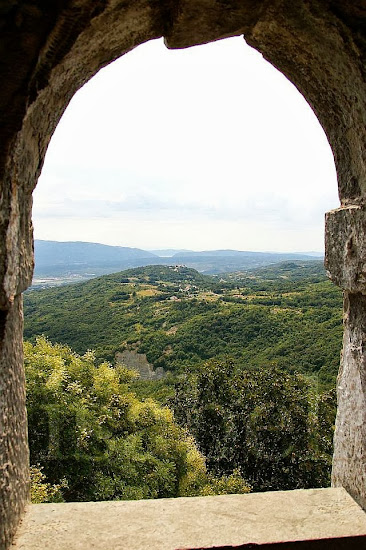 And this is the majestic view from the top... Definitely worth the climb! 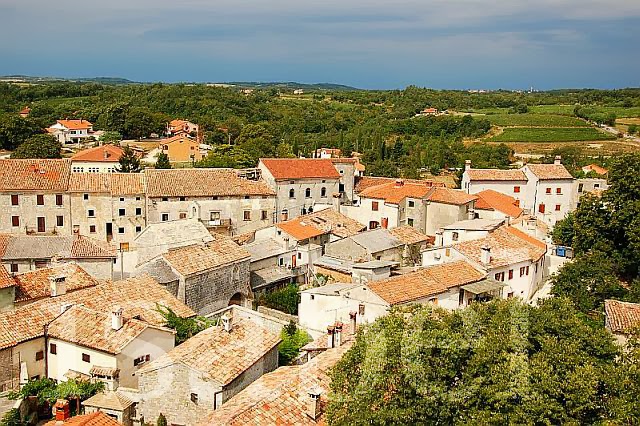 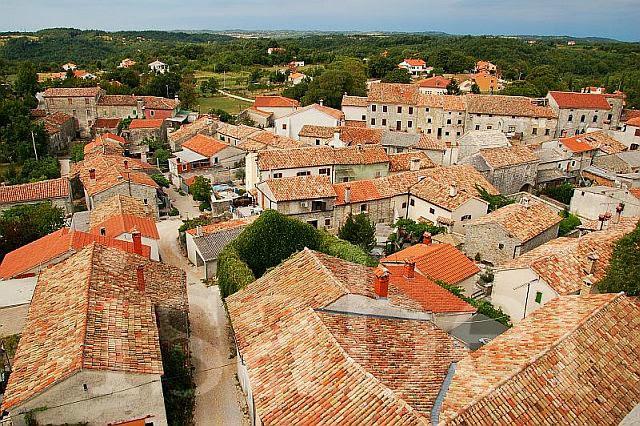 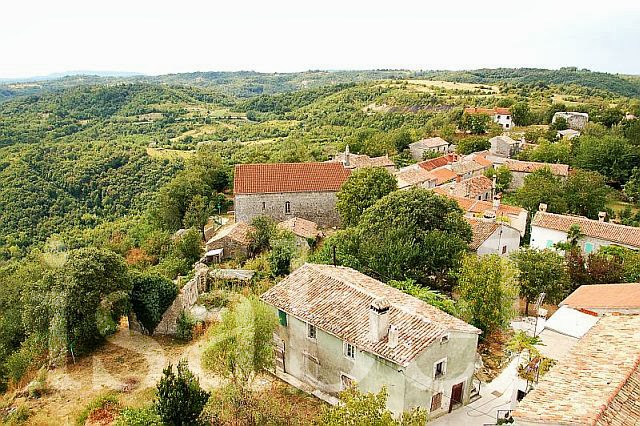 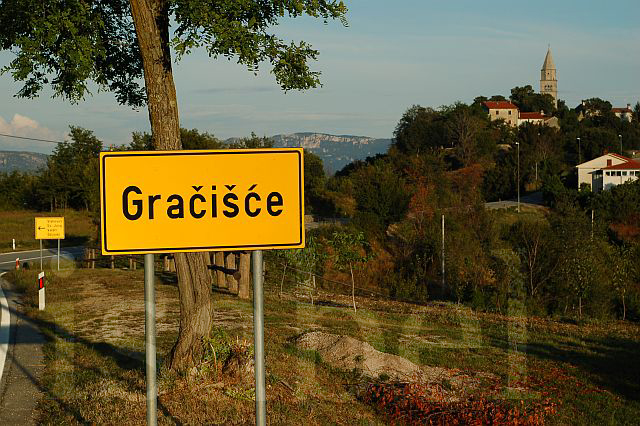 Friends have been asking me how to pronounce Gračišće. It is quite a tongue-twister. So in case you were wondering, it’s pronounced Gratsch-eesh-che. 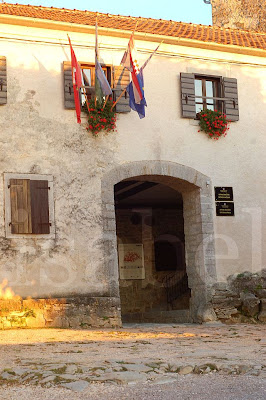 Gračišće is a typical Istrian hilltop village, with many of its houses and buildings dating back to medieval times. At the time, these villages were fortified, encircled with high-walled ramparts and towers, with only one or two entrance gates. Today there’s one tower left and the main gate still stands and welcomes visitors into old Gračišće.

Few people live in old Gračišće. Most young people here prefer to build their own houses and don’t see much value in the old stone houses which make up the village. Many newer houses have cropped up in ‘New Gračišće’, on the other side of the main road. There are also many smaller villages and hamlets scattered around the countryside which make up the larger municipality of Gračišće.

(Left: the main entrance gate to Gračišće. Below: the last remaining tower.) 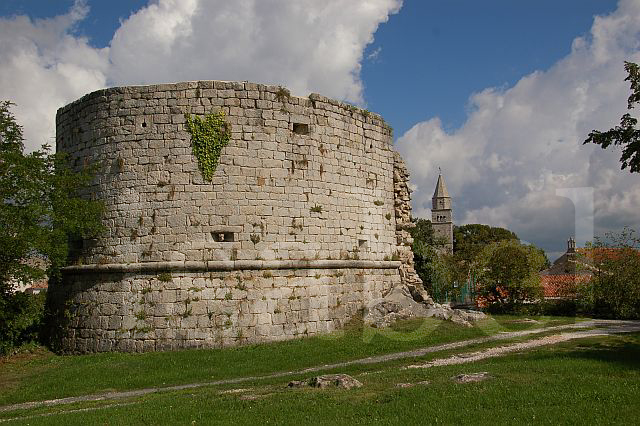 The village stands at an elevation of 457 metres above sea level and offers stunning views of the surrounding countryside. 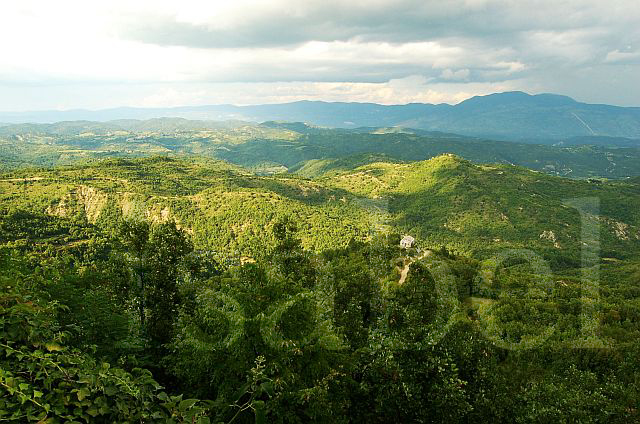 Above: The spectacular view from behind the main church. 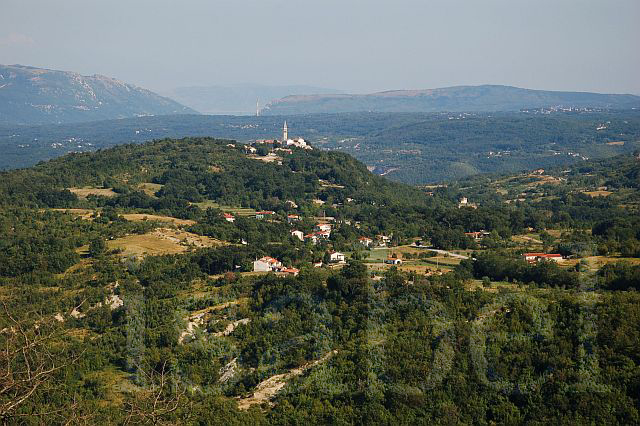 Above: A view of Pićan, another neighbouring hilltop village. 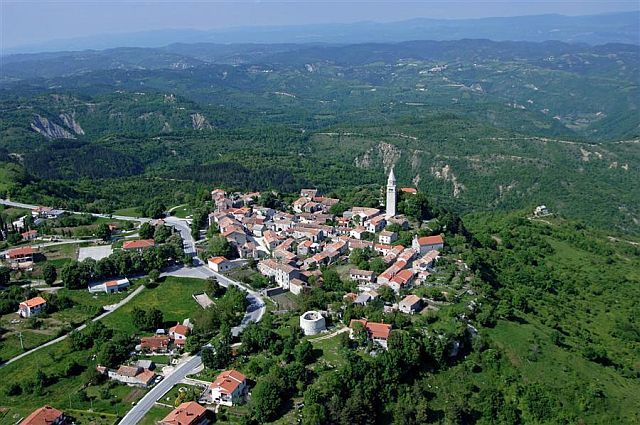 Above: An aerial view of Gračišće (not my photograph - I found it on the net)

Gračišće has been going through a slow transformation over the past 20 years. Like many other towns and villages across Istria, Gračišće’s population dwindled after most of its inhabitants started leaving after the Second World War and throughout the 50s and 60s, many migrating to other European countries like Italy and Germany or much further afield, to South America, North America and Australia. Many of the village’s dwellings stood abandoned and derelict, and many still are. But slowly its houses have been reclaimed, sold and bought, and renovated. Some have been converted into tourist accommodation. Gradually the village has been given a makeover and thanks to its cultural heritage status, the character of its houses and buildings cannot be altered and must be preserved (though there are a few aberrations here and there). Then more recently, the fine gravel which covered the squares, roads and lanes has been replaced with paving stones, giving the village an elegant finishing touch. As for the population, this seems to continue to decline as its residents get older and few young people want to invest in the renovation of an old house in an old village. Some of those who do, decide to rent their property out to tourists during the summer months and capitalise on Gračišće’s rustic charm.

Discover it for yourself. Take a walk through Gračišće: 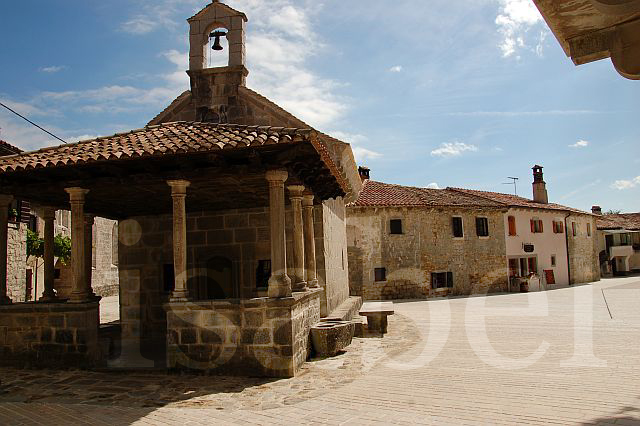 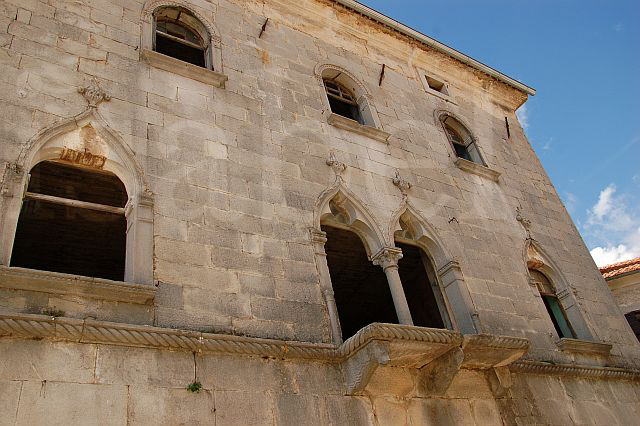 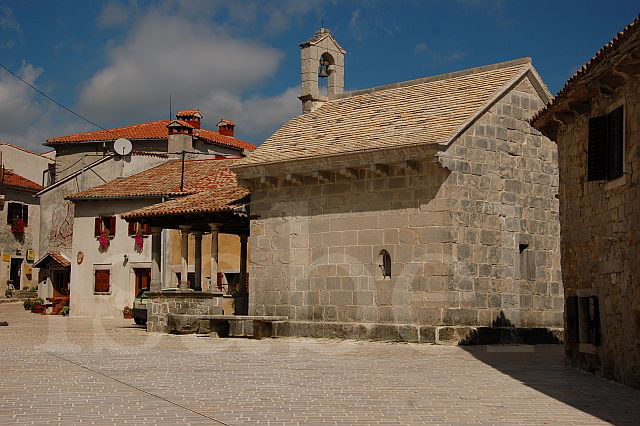 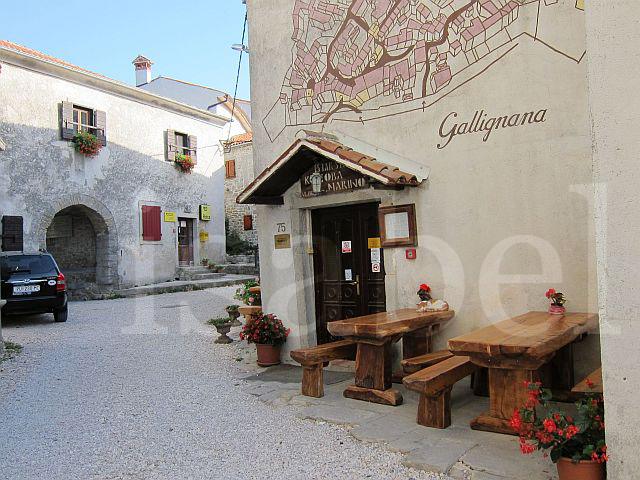 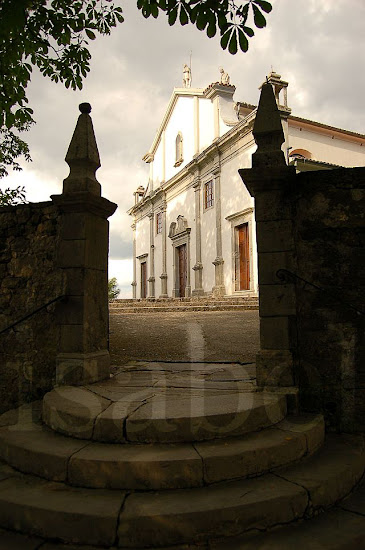 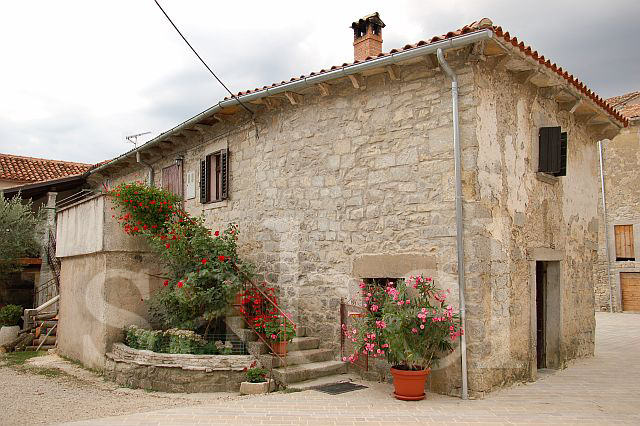 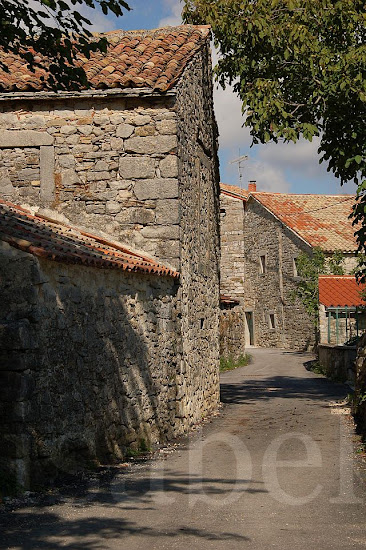 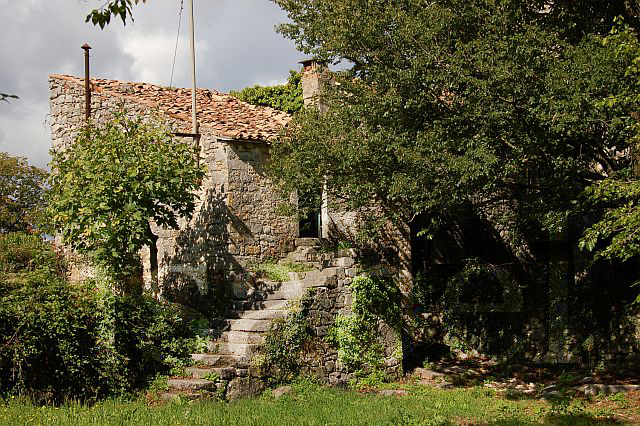 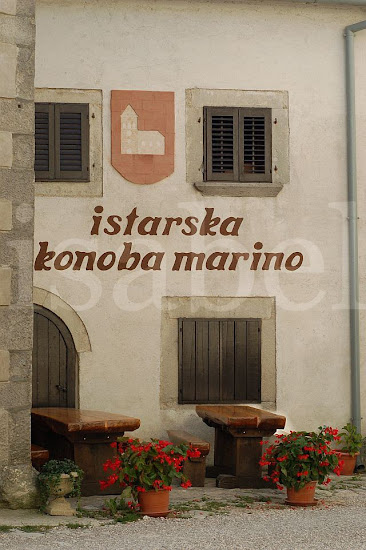 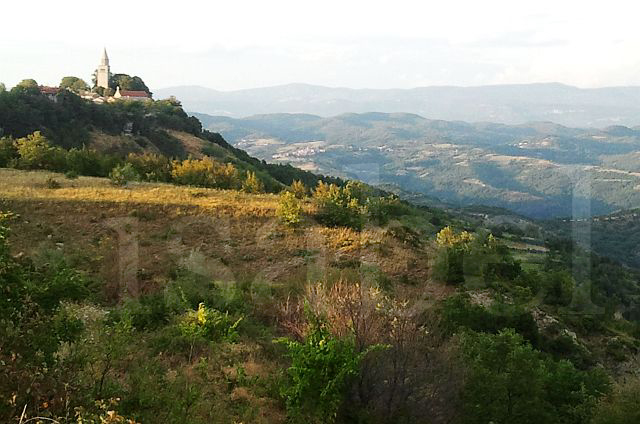 From the bustling metropolis of Bangalore in South India to a small sleepy village in rural Croatia… the contrasts couldn’t be more striking.

I’ve moved from a city of 9.5 million to a village of maybe one hundred inhabitants. From a country where 65% of the population is under 35, to a village where the average age is probably about 65.

I miss the noise and chaos of Bangalore but savour the peaceful nights filled with starry skies, where the only nocturnal sounds are the crickets chirping and the occasional catfight.

I miss the intoxicating smells of India: fresh jasmine flowers and burning incense. I’m thankful for  the clean country air and the clean tap water which does not need to be purified.

I miss the soft idlis and crispy dosas but appreciate the fresh vegetables our neighbours give us, grown in Istria’s rich red soil.

I miss Bangalore’s vibrant cultural life but take the most amazingly scenic evening walks and marvel at the beautiful landscapes turning golden by the setting sun.

I miss all my wonderful friends in India but am happy to be close to my extended family who have known me since childhood, and my father who lives next door.

Why did we leave India and what are we doing in this tiny village? I explain everything on this page.

With this first post, a new blog begins… here I’ll be sharing my observations of life in a small village in central Istria and our experiences renovating an old house. In the next few weeks, I’ll be taking you around the village and sharing different aspects of life in Istria.

I’ll be publishing a new post every Friday for the next month, so do come to my window every week to see what I’m up to!
Isabel at 08:38 1 comment:
‹
Home
View web version