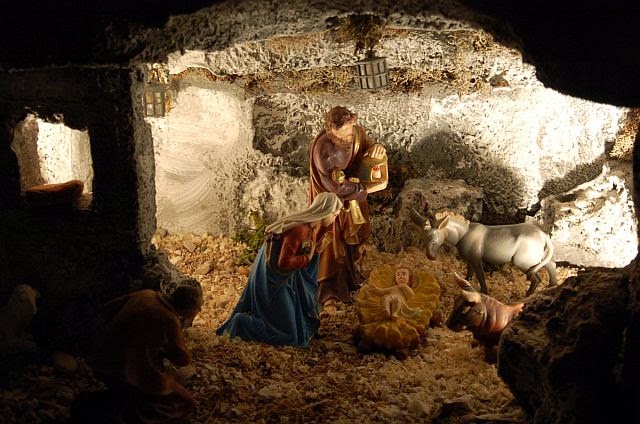 This is just a small detail (but the most important!) of the elaborate Christmas nativity scene that has been set up in the main church in Gračišće. The famous manger scene will take on much bigger proportions on December 26th and January 6th, when Gračišće will be hosting a ‘live’ nativity scene, which the village’s residents are now busy getting ready for. Our neighbours will be dressing up and enacting not only Mary, Joseph and yes, baby Jesus (a role reserved for the village’s youngest resident), but also the Three Wise Men, as well as traditional trades and craftsmen. Stay tuned for a future blog post on this...

In the meantime, I wish all my readers a very Merry Christmas!
Isabel at 18:19 2 comments: 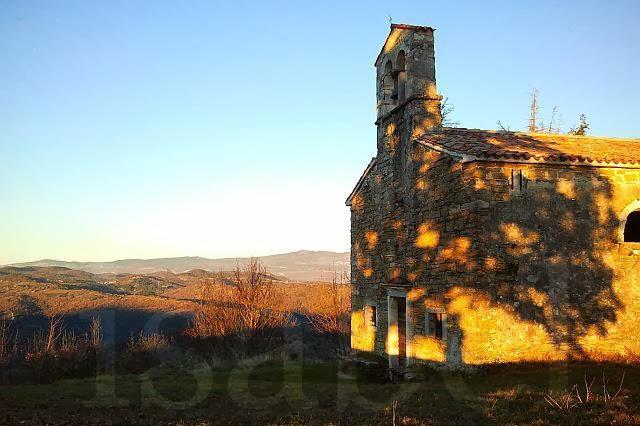 Today’s the first day of winter. Though I wasn’t looking forward to winter, the fact that today’s the 21st of December is a bit of a relief because it means that from today the days will get longer. This morning the sun came up at 7:39 and will be setting at 16:22. Before I know it, the day’s over! So I’m glad that from tomorrow onwards, we’ll get a few seconds and then minutes more of daylight each day.

This will be my first winter in seven years so that’s why I’m not looking forward to it. Yes, I’ve lived most of my life in Canada so I know all about winter and snow, ice, hats, coats, scarves, gloves and boots. But I was thoroughly spoiled during the seven years I spent in South India. I wore sandals year round, rarely wore socks and never had to think about heating. Though I’m not really a ‘summer person’ – my favourite seasons are Autumn and Spring – I loved living in a tropical climate where it was summer every day and very quickly got used to it.

So now that I’m back in more Northerly climes, keeping warm has become a high priority. The sandals have been stored away, I now have an impressive collection of thermal socks, and I’ve been spending a lot of time thinking about heating… 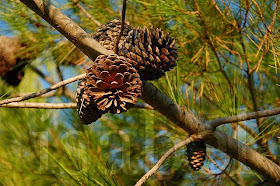 In Canada our heating ran on electricity (which is cheap over there) and in Belgium we used natural gas to run our central heating system. Here in Istria, piped gas is not available (except in a few cities), so we use a gas cylinder for cooking (like we did in India). However, very few people use gas for heating because it’s expensive and most use wood as it’s the cheapest and most readily available energy source.

So when considering what kind of heating system we’re going to use in our little house, we’ve had to carefully weigh all the options. Gas is out because it’s too expensive and inconvenient: we’d need to order a new cylinder at least every other week, probably more. Wood is the cheapest option but there are other considerations. It is not very convenient either because it has to be cut, stored in a dry place, carried inside, and put into the stove. Also, there’s no waking up in a warm house because it’s not possible to maintain a fire overnight and it takes some time to light and get a fire running.

One day at the Pazin market we saw a demonstration for some fancy Italian stoves which used pellets – a type of processed wood. Pellets seem to be more energy efficient than wooden logs and these sophisticated stoves have a built-in control panel and even a timer – which means you could wake up to a warm house. But of course these clever stoves come with a hefty price tag. 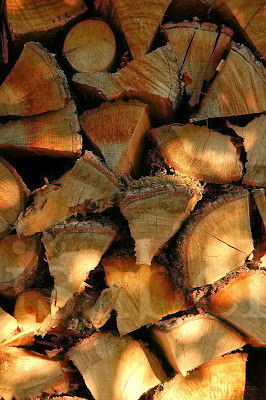 When I ask family members for advice, I always get the same answer: wood is the way to go because it’s the cheapest option. But what about other considerations? No one here seems to think about the environmental impacts of burning wood. When I ask people where they get their wood, many tell me they have some forestland where they chop down a few trees every winter to use for firewood. There is a lot of forest in Istria and if there is an environmental impact, it’s not noticeable. My father told me that when he was young, most of the land in Istria was cultivated – today it’s covered with forestland. So the forest does seem to be able to regenerate itself despite the fact that so many people are cutting down trees. I wonder if this is because supply still outweighs demand, and whether this can continue and the forest will always be able to regenerate itself.

Then there’s the question of air quality. Walking through the towns and villages here, the smell of burning wood in the air is a novelty for me and not unpleasant. But when we drive down into Pazin, we can see the layer of smoke hovering over the town. There’s no doubt that this must affect air quality.

So the heating debate continues…it’s a question of cost over convenience and consideration for our environment.

Welcome, 1st day of winter! May the days get longer and take us quickly into Spring!
Isabel at 18:50 1 comment:

'Tis the season in Istria 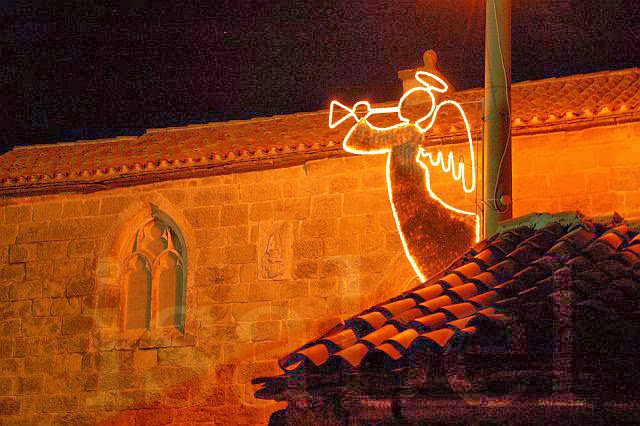 Christmas is just around the corner. The village has been decorated with colourful lights, giving it a touch of holiday cheer. The days have been bright and sunny, crisp but not cold. There’s no chance of a white Christmas in Istria. However, it is snowing on my blog! 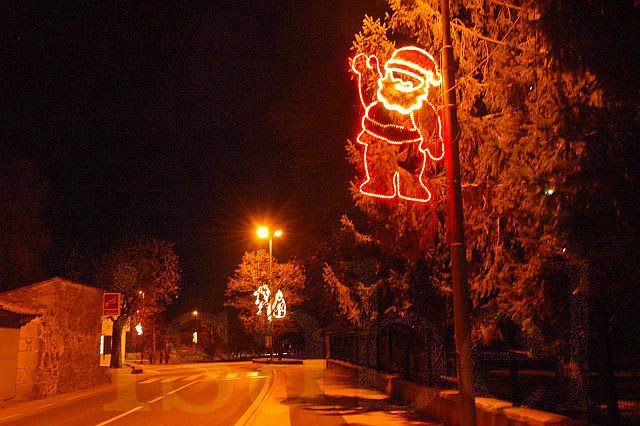 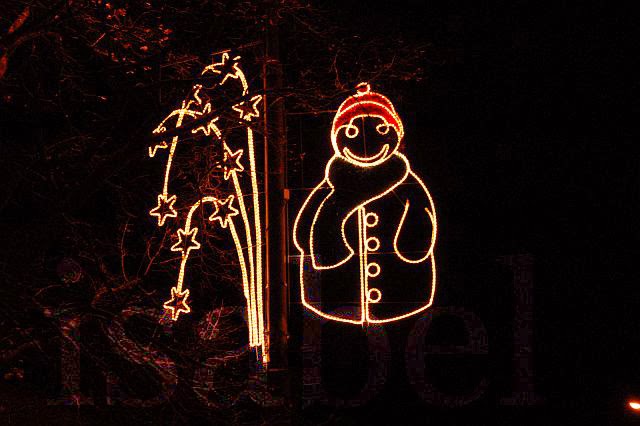 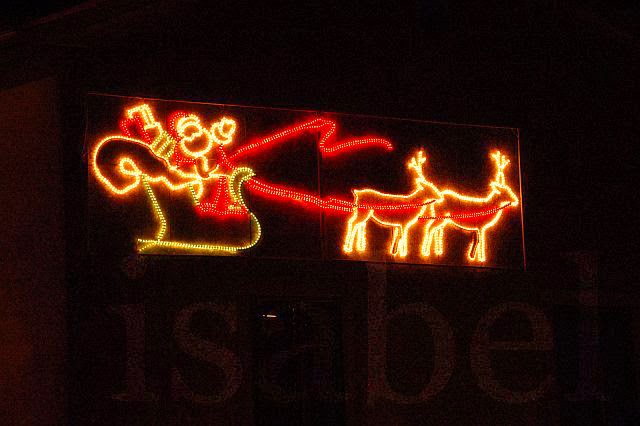 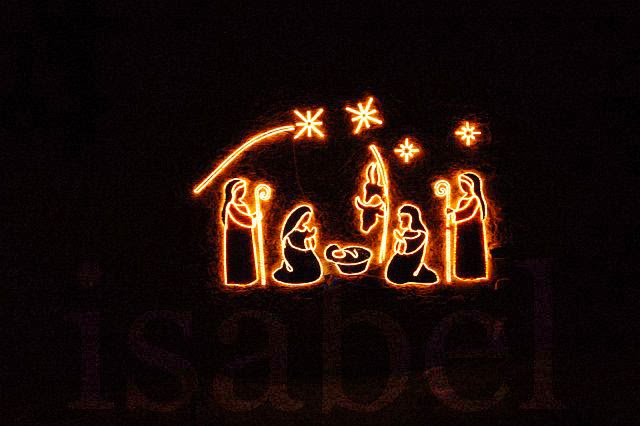 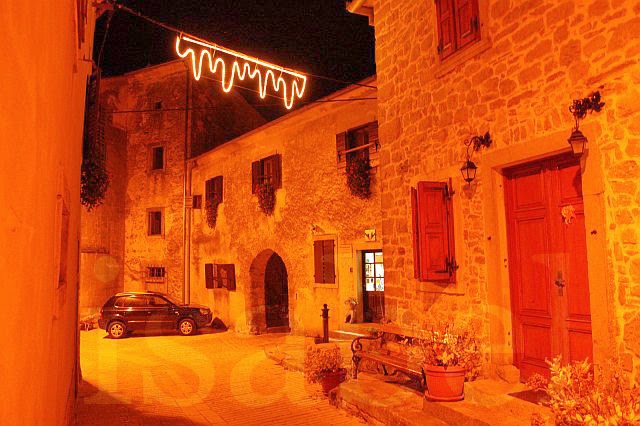 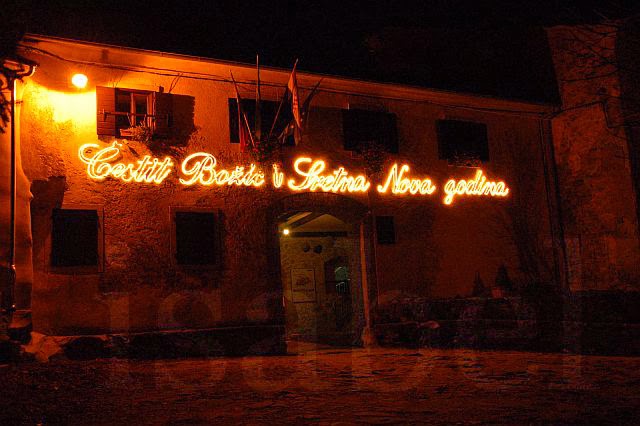 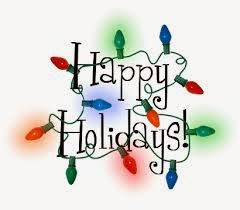 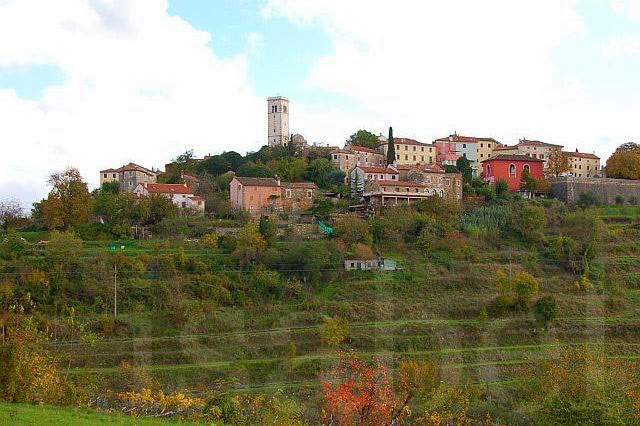 One of the things I love about Istria is its varied landscapes: its picturesque seaside towns, spectacular islands, and breath-taking expanses of undulating hills stretching out for as far as the eye can see. But it's the landscape of central Istria that I love best: the rolling hills topped with scenic old villages. I love to explore these old villages, many of which are like ghost-towns of times past…

One of these hilltop towns where time has stopped is Oprtalj (Portole is its Italian name).

The drive up winds through pine forests before reaching a plateau at 378 metres from where there are magnificent views of the neighbouring hilltop town of Motovun, which is better known by tourists. 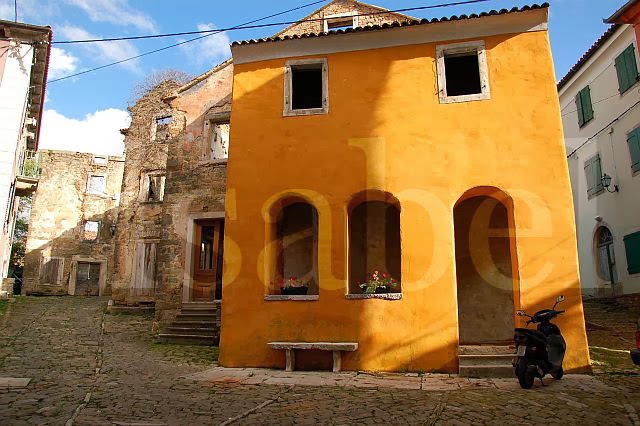 Walking through Oprtalj's cobble-stoned streets and passing under its ruined stone archways, I try to imagine what life was like here in the town’s glory days... 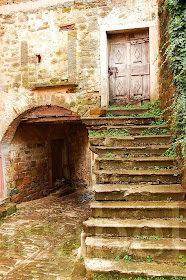 When were its glory days? When it was a hill fort settlement during the Roman period? Or was it in the 16th century when this was part of the Venetian Republic? Venice has indeed left many marks: the handsome Venetian loggia at the town’s entrance and a statue of the Lion of St. Mark, along with many architectural details which hint at its Venetian past. 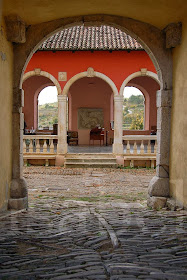 Through an archway, the Venetian-style 'loggia'. 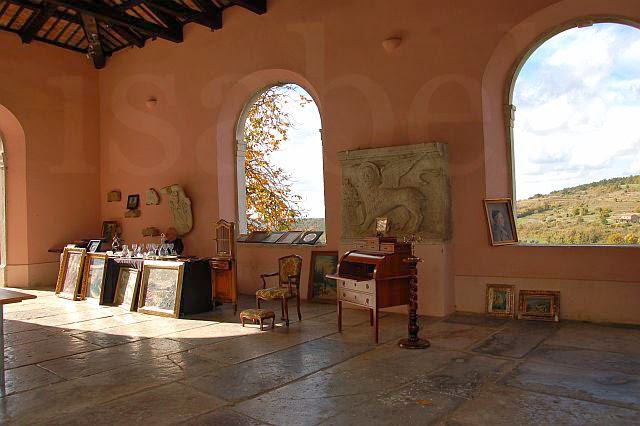 Inside the loggia we find the Lion of St. Mark. This is where an antiques market takes place on the second Sunday of each month. 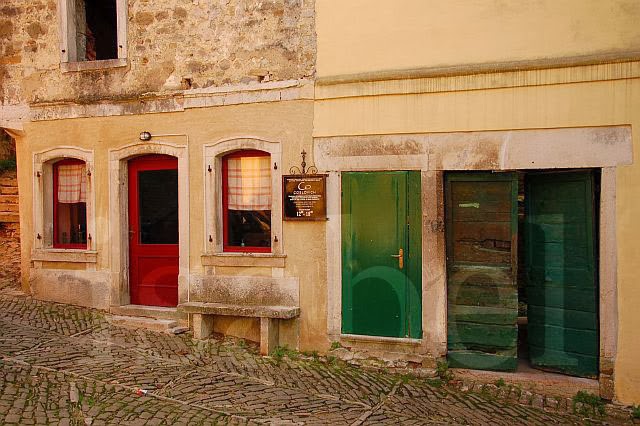 There are a few cafés, restaurants and shops here and the village seems to be going through a slow revival, but most of its old houses and buildings are in a neglected state. 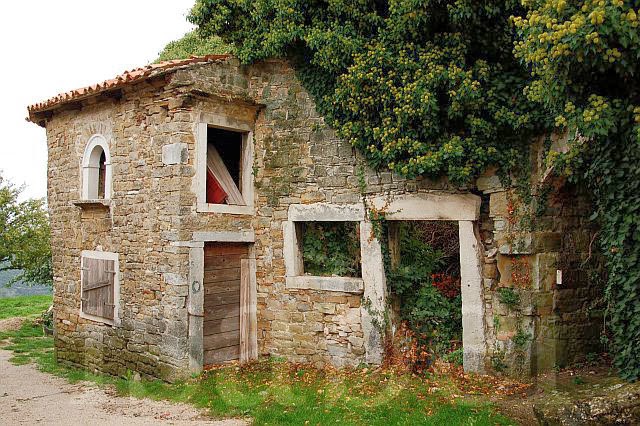 The last time I was here was about eight years ago... and I had imagined Orptalj would be in a more advanced state of reconstruction. But its charm is intact and this remains one of my favourite villages in Istria. Our next stop was another central Istrian gem: Završje, which will be the topic of a future post. 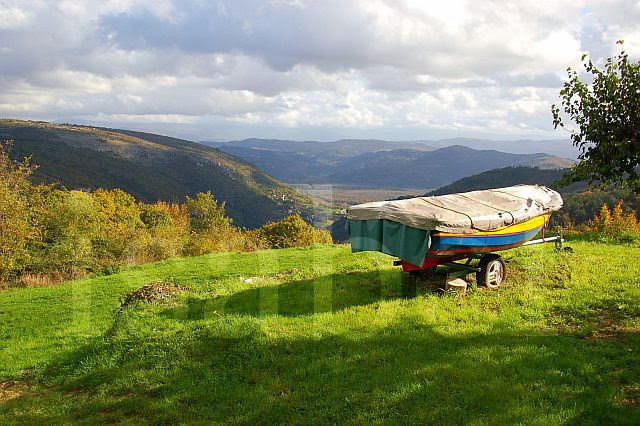 I leave you with this image of a boat perched on the edge of the village!
Isabel at 09:00 1 comment:
‹
›
Home
View web version