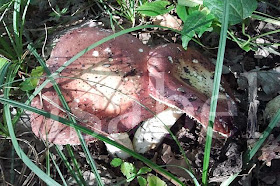 I don’t think I’ve ever eaten so many different varieties of mushrooms cooked in so many different ways than in the past few weeks. When we ran out of ideas of how to cook them (fried, in risotto, breaded…) and were almost – yes – fed up of eating them, we decided to use the rest of our supply to make a tasty mushroom soup.

The wet weather we’ve had lately has provided the ideal conditions for mushrooms to grow in the dark and damp forests. Istrians love their mushrooms and the locals here know all about the different varieties, where to pick them and importantly, which ones are edible and which ones are not.

When I eat mushrooms I always think of my grandmother. She had loved to pick mushrooms in the forest near the family home and then cook them up for her grandchildren, though she didn’t appreciate the taste of mushrooms herself. During my visits to Istria, I liked to go to the forest with her and would be amazed at how easily she would spot them, while my untrained eye searched in vain.

This is also the peak season for truffles. Our truffle-hunting neighbour has had more luck lately. As soon as he takes his tractor out of the garage every morning, his dogs run around in excitement, knowing that they’re going truffle hunting. They jump onto the trailer hooked up to the tractor and off they go into the forest. Just yesterday he showed me three white truffles he found, which looked like small, bumpy, yellowish-coloured potatoes with a very pungent smell. This was a lucky find as white truffles fetch a very high price.

It is from mid-September to mid-January that this highly-prized white truffle (called Tuber Magnum Pico) can be found in the forests of Istria. This rare truffle only grows in very few places in Europe: apart from Istria, it can also be found in the forests of Italy and France. Truffles generally grow about 25 centimetres underground around the roots of certain trees like oak, linden, poplar and willow, and can sometimes be found at the ground’s surface too. Since it’s so rare and a much-appreciated culinary delicacy, the white truffle costs up to 2000 Euros per kilo. The less pungent black truffle however, is available all year round and is significantly less expensive: these go for 200-300 Euros per kilo.

Recently we went to the village of Livade near Motovun for Tuberfest, one of the many truffle festivals happening around Istria. We tasted samples of white and black truffles as well as dishes prepared with them. There were also all kinds of ‘truffle products’ for sale like flavoured oils, pastes, cheeses and pasta.

The highlight of the festival in Livade was the truffle hunting demonstration. The multilingual guide (who spoke Croatian, Italian, German and English) shared her vast knowledge of truffles and truffle-hunting. She explained that there are about 800 registered truffle hunters in Istria holding the required licence – how many ‘unregistered’ hunters there are is anyone’s guess. Hunters can spend hours walking through the forests with their specially-trained dogs who have a highly-developed sense of smell for truffles. Once a dog catches the scent of a truffle, it starts digging furiously at the ground. The hunter then gives the dog a treat and continues the digging because it’s important not to damage the truffle. Apparently the best dogs for truffle-hunting are German hunting dogs (Weimaraners) and an Italian breed of dog called Lagotto Romagnolo. A hunter will always have two dogs with him: one is experienced in truffle hunting while the other is younger and still in training and learns by imitating the older dog. Early morning is considered the best time to hunt for truffles because the dogs’ sense of smell is at its peak and they’re also hungry so keen to hunt.

Just as the guide finished her presentation, a dog jumped out of the forest we were standing next to (perfectly timed!) and started digging frantically. Close behind him was another dog and their owner who was quick to take over and continue the digging with a small spade, unearthing – surprise, surprise – a white truffle.

According to the Guinness Book of World Records, the largest white truffle was found here in Istria in 1999, weighing 1.31 kg and valued at over $5000. This record is held by Giancarlo Zigante but locals here say that he did not actually find it but had bought it from a truffle hunter. Mr Zigante has a well-known truffle restaurant in the village of Livade and a shop which sells truffles and all kinds of truffle products like truffle pastes and oils.

Truffle hunting is in any case, a very lucrative business and many people in Istria try their luck in finding the elusive white truffle. Our neighbour told me about a large white truffle he had found years ago, the proceeds of which he was able to use to finance the construction of his house. Today, due to less favourable exchange rates and higher living costs, the profit would not be as significant, but truffle hunting is a way many people try to supplement their income.

As for the taste of truffles, this is something which is hard to describe… the taste is very ‘earthy’ and somehow a bit mushroom-like, similar to the smell and taste of dried mushrooms. The taste of the white truffle is very strong and the smell almost overpowering. My favourite way of eating it is grated over a traditional type of Istrian pasta called fuži.

Have you ever tried truffles? Black or white? What's your favourite way of eating them?
Isabel at 16:20